17/07/2015 - 15:15
The interplanetary dust particles commonly called IDPs are micrometric extraterrestrial grains (typical size of ten microns). They are collected by NASA’s stratospheric aircrafts (at an altitude of ~ 25 km). Their origin asteroidal and/or cometary has always been a subject of investigation.
In recent years we have conducted a systematic analysis of IDPs using infrared micro-spectroscopy through a collaboration with the SMIS beamline at the SOLEIL synchrotron.
This work reveals, in one hand, the connection between asteroids/comets and extraterrestrial material collected for laboratory studies, and gives in another hand, valuable information on the relationship between organic matter and mineral phases probably due to physical and chemical processes in the primitive nebula. 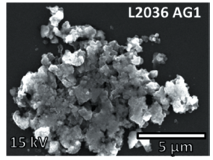 Fig.1: Image of an interplanetary dust particle (IDP L2036 AG1) obtained at Orsay using a scanning electron microscope with a voltage of 15 kV (the scale is 5 µm). Image taken from [1].
The infrared micro-spectroscopy analysis of IDPs has two major advantages. In addition to be a non- destructive analytical technique (it does not alter the physical and-chemical properties of the analysed samples), it allows a direct comparison of laboratory results to astronomical observations in the same wavelength ranges.
In our analyses of anhydrous IDPs (Merouane et al. ApJ 2014), we performed a quantitative study of the mineral composition of a dozen particles. We defined two different classes of mineralogy: the first one rich in olivine and the second rich in pyroxene. The comparative analysis of the organic components from these particles has allowed us to highlight a relationship between the mineral composition of the IDPs and the lengths of the associated aliphatic chains. This study, combining IR and Raman analyses, has thus allowed us to suggest on a possible potential catalytic role, the nature of which remains to be elucidated, of the silicates in the formation and elongation of the aliphatic chains in the primitive nebula.
However the precise origin (asteroidal or cometary) of this dust has not been elucidated in this first study.

Fig.2. These figures extracted from [1], give on the left panel the IR spectra of the twelve studied particles. The right panel shows the two defined classes of IDPs with their characteristic CH2/CH3 ratios. The olivine-rich particles have a CH2/CH3 ratio higher than those of the pyroxene-rich particles.
Following this work, a collaboration led by P. Vernazza LAM (Vernazza et al. 2015, ApJ) was then conducted to perform a comparative study of the IR spectra of IDPs obtained at IAS with those of different primitive asteroids (B, C, P and D types) as well as with those of comets Halley and Hale-Bopp.  All these objects are characterized by a very weak albedo and are rich in carbon and organic matter. They also contain silicates and some icy components.
This study shows a remarkable correspondence between the spectra of the anhydrous pyroxene-rich IDPs with those of BCG-type asteroids, which account for ~ 53% of the main belt’s mass. However, the P and D-type asteroids (representing ~ 13% of the main belt’s mass), as well as the spectra of the Halley and Hale-Bopp (H-B) comets, would better fitted using a mixture of pyroxene-rich and olivine-rich anhydrous IDPs. 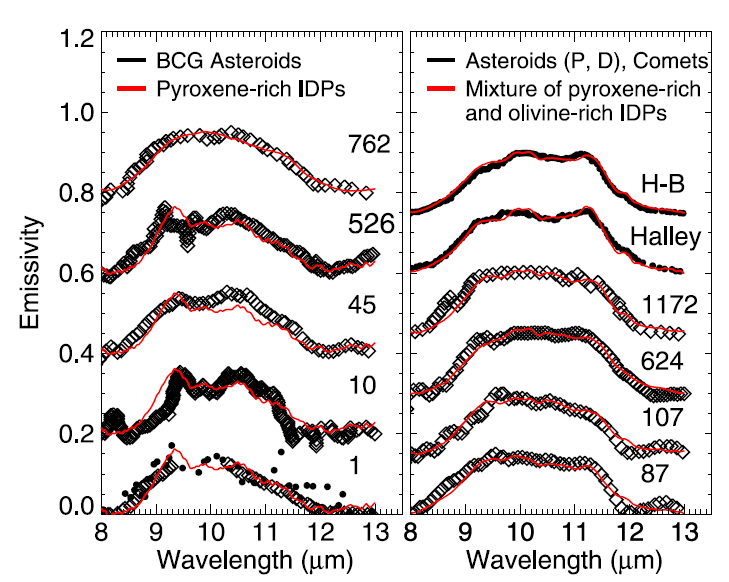 Fig.3. This figure extracted from [2] shows on the left panel the comparison of the 10 µm band of the  pyroxene-rich IDPs with those of different BCG-type asteroids (characterized by a low albedo, a carbon rich composition with organic matter and silicates). On the right panel, the 10 µm bands of two comets and 4 P and D-type asteroids require a mixture of olivine and pyroxene-rich composition for a better fit.
This study shows also that anhydrous IDPs only have spectral properties consistent with those of the surfaces of icy asteroids. It thus challenges the benchmark status of the meteorites in the knowledge of the asteroid belt. While the meteorites allow to sample the surface composition of most metallic and hydrated rocky asteroids, the largest proportion of these small bodies, i.e. the icy asteroids, are not represented by the different meteorites collections in laboratories.
Figure 4 below shows the correlations between different small solar system bodies (asteroids and comets) with meteorites and IDPs. 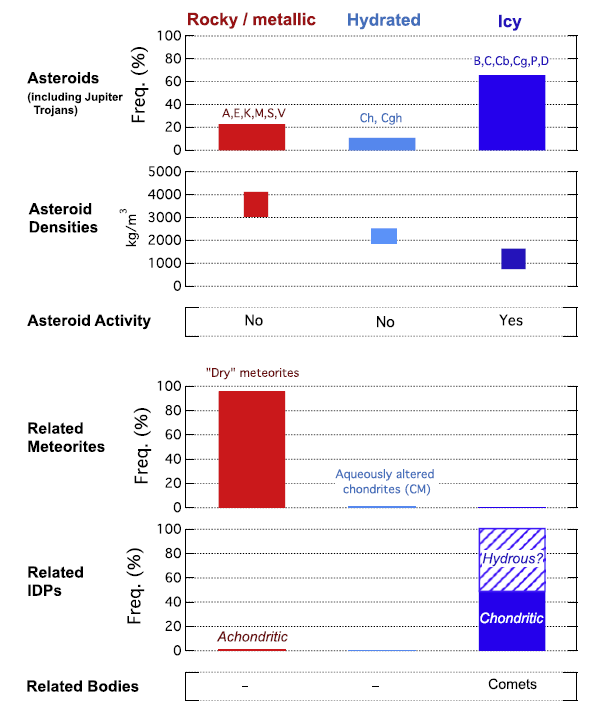 Fig.4: Extracted from [2], this histogram gives the correspondence between the different small bodies of the solar system and the samples available in laboratories. “Dry” meteorites (not subjected to aqueous alteration) would be good representative of the surface composition of rocky and metallic asteroids. IDPs are connected to the icy asteroids, some of which may show an activity similar to that of comets.
This data representation shows that the greatest fraction of the accreted material on Earth, i.e.  interplanetary dust grains, is representative of the most significant fraction of the asteroids forming the main belt, i.e. the icy asteroids. Secondly, it corroborates the idea that the frontier between icy asteroids and comets is becoming tenuous.
In conclusion, these results show the importance of coupling laboratory analyses of the so-called primitive extraterrestrial matter, with laboratory simulations to try to elucidate the physical and chemical evolution of the surfaces of icy asteroids. These simulations are performed, thanks to the INGMAR experiment (IAS-CSNSM collaboration, Orsay), in junction with the experimental approach performed on the VUV irradiation of ices (MICMOC experiment, IAS), leading to a complex organic chemistry that may have played a role in the prebiotic chemistry on the surface of the primitive Earth.
Contacts :
Zahia Djouadi, zahia.djouadi (at) ias.u-psud.fr
Sihane Merouane, merouane (at) mps.mpg.de
Louis d'Hendecourt, ldh (at) ias.u-psud.fr
Pierre Vernazza, pierre.vernazza (at) lam.fr
Rosario Brunetto, rosario.brunetto (at) ias.u-psud.fr
References:
[1] S. Merouane, Z. Djouadi et L. d’Hendecourt, ApJ, Volume 780, Issue 2, article id. 174, 12 pp. (2014)
[2] P. Vernazza et al., ApJ, Volume 806, Issue 2, article id. 204, 10 pp. (2015)
http://www.insu.cnrs.fr/node/5372