The team « Astrochemistry and Origins » offers a thematic brige between two other teams at IAS, namely « MIC » and « Planètes/Exoplanètes ». 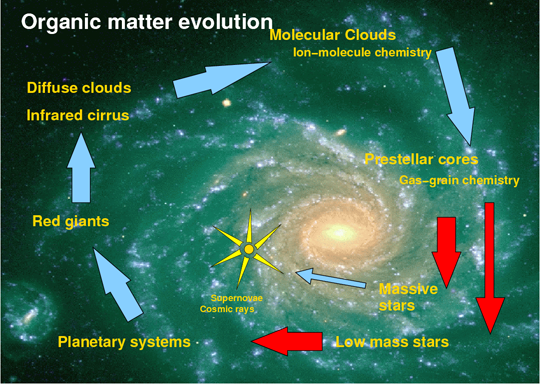 This bridge is based on experimental techniques, including spectroscopy, simulations of extraterrestrial matter and the use of various analytical methods to understand the physical and chemical composition and evolution of the solid state material in our Galaxy as well as during the formation of our Solar System and other possible planetary systems.
The evolution of this matter is first closely related to the lifecycle of interstellar grains, from their birthplace in the cool envelopes of late type stars, then passing through the diffuse interstellar medium and to the molecular clouds. These grains then follow the collapse of the clouds to form stars, planetary disks and then planets. This pristine material survives in comets. Interstellar matter thus becomes interplanetary and can be recovered to be analysed on Earth to help retracing the history of the solar nebula.  Most of the physical processes encountered by interstellar grains during their lifecycle can be approached using appropriate simulations in the laboratory. At this level, our main goal is to propose a qualitative and quantitative description of the physical and chemical compositions of the grains in various environments. Our diagnostics rely heavily on spectroscopy that will help elucidate the so-called interstellar extinction curve observed towards so many different lines of sight to distant stars. Emphasis is given on the infrared part of this curve since obviously, infrared is the main method to access the chemical composition of interstellar grains such as silicates, carbon coatings, dirty ices and organic materials built up during photochemical processes of these ices, these organic molecules being often considered as prebiotic materials.  The destiny of this interstellar material is to built the initial bricks of our Solar System. Comets, non differentiated objects do have preserved this pristine material that did not participate in planet formation and evolution. This pristine material can be retrieved as micrometeorites sometimes known as Interplanetary Dust Particles (IDPs). Analysis of extraterrestrial matter in the laboratory is a relatively recent discipline in astrophysics. From more and more refined analytical methods as well as from larger collections of samples, it is possible to study the history of our Solar System and the various steps of its formation.

This makes the second main theme of our group which includes also here, simulations of physical processes that may have taken place in the early solar nebula.  Our team thus covers two main themes related to the simulations of physical and chemical interstellar processes to interpret astronomical observations and the analysis of natural samples of cosmic dust. A particular effort is devoted to the convergence these themes as it is largely recognized that the elements that surround us find their origin in the stars and in the evolution of the cosmos, towards molecular complexity. Finally, our team is structured from our participation to projects that make use of large instruments of astrophysics, either from the ground or from space observatories as well as deep space probes for in-situ studies of solar system objects. Focus of our efforts lie primarily in astrophysical applications of our experimental work that plan to ultimately elucidate a part of our origins, those linked with Astrochemistry and Origins and the general evolution of our Galaxy in the Universe.