Is the standard cosmological model the preferred one again?

In 2013, the Planck results showed, for the first time, a discrepancy in the cosmological parameters determined from the cosmic microwave background (CMB) and the number counts of galaxy clusters. This inconsistency was also confirmed by the 2015 Planck results and by independent weak lensing and X-ray observation analyses. Researchers at IAS performed a re-analysis, using the 2016 Planck results, and have shown that the CMB and galaxy cluster data now actually converge to the standard model of cosmology, with cold dark matter and a cosmological constant.

These results showed a discrepancy with respect to the observed CMB primary anisotropies, which are related to the total matter density in the Universe and its distribution at large scales. This difference was confirmed by independent weak lensing and X-ray measurements and also by using the Planck 2015 results for almost 500 clusters.

Such a discrepancy could have two possible origins: The estimated cluster masses are underestimated by a factor of two, which is unlikely given the current knowledge of galaxy clusters physics, or this disagreement is a hint of departures from the standard and simplest cosmological model.

In 2016 the Planck consortium released new results including the polarisation signal from primary anisotropies, with new constraints on the reionisation process and on the formation of the first stars. In an analysis published in the journal Astronomy and Astrophysics, a team of researchers from IAS performed a detailed and more complete study. They used the new results from Planck, combining for the first time CMB data with two different observable quantities from galaxy clusters: the number counts and the angular correlation function over the sky. This analysis shows that the disagreement between CMB and galaxy clusters is much reduced by the use of these new Planck data.

The team also explored departures from the standard model of cosmology, considering first the effect of massive neutrinos and then a dark energy component different from the cosmological constant. In both cases, results show that the extensions to the standard scenario do not help in solving the remaining small discrepancy between the CMB and galaxy cluster data, which therefore remains to be explained.

The standard and simplest cosmological model, with the new constraints on the reionisation parameters provided by Planck, is therefore the preferred one, allowing for an improved agreement between the CMB and galaxy cluster observables. 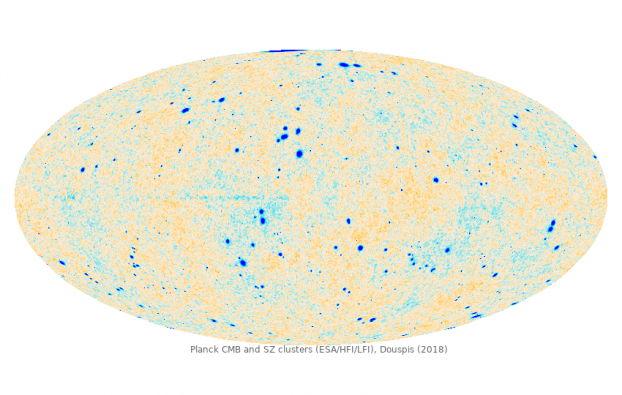 Full-sky map of the galaxy clusters detected by Planck, superimposed to a map of the CMB. Credits : Nabila Aghanim