From source to sink: Meteorites from Mars have been known since the 1970’s, but researchers in Oslo, In Lyon, and at IAS have for the first time been able to identify the source crater for shergottites, the largest group of martian meteorites. The source region on Mars was probably impacted about 3 million years ago by a medium-size body, and the meteorites ended their space journey at the Earth’s surface a few thousand years ago.

The geological evolution of other planets is difficult to study because it is unfeasible to access their surfaces other than by space missions. But because meteorites derived from some planetary bodies have landed on Earth, we can analyze these alien rocks in the laboratory. We can determine their age and their mineralogy, and therefore derive information on the geology and evolution of the parent body. Detailed laboratory analyses also tell us about a planet’s magmatic and petrologic evolution. However, when we do not know the geographic location and geological setting of the source region, it is crucial to find out from which site the meteorite was ejected to Earth.

The only method to establish a time-constrained geological evolution on terrestrial planets is to determine the crater density on their surfaces. As higher the density is, the older the surface is. Calibrating these crater densities within an absolute time frame requires several steps, starting with a model for the moon where crater frequency can be related to absolute ages derived from lunar samples.

The team from Oslo, Lyon, and Orsay has for the first time been able to identify the source crater, Mojave (7.5˚N, 33.0˚W), for the largest group of martian meteorites, the so-called shergottites. Since they have identified the crater location and geological setting for these meteorites, the mineralogy and ages of the meteorites can be placed in a geological context. A long-lasting debate about the original age for the meteorites, younger than 600 million years or older than 4.1 billion years, has now been settled in favor of the old ages. 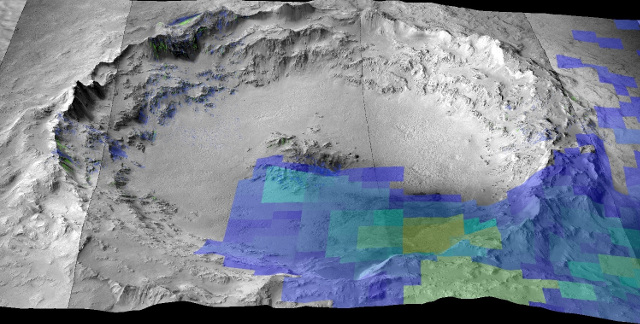 The Mojave crater, formed a few million years ago and identified as the source region of the most common martian meteorites (shergottites). The colored areas reveal the presence of mafic minerals (both pyroxene and olivine) as seen by OMEGA/MEx and CRISM/MRO. The same minerals are also found in the Martian meteorites from terrestrial laboratory measurements.