28/03/2017 - 16:30
A multidisciplinary team involving researchers from IAS, IPNO, ISMO, and CSNSM in Orsay, and GSI in Darmstadt (Germany) has characterized in the laboratory the effects of heavy cosmic rays on the structural change and sputtering of small carbonaceous species released when cosmic rays, simulated and accelerated at the GSI accelerator, hit a carbonaceous interstellar dust grain analogue. The measurements performed during such simulations allow knowing the processes induced by radiations observed in space and their relative importance. The objective of these studies is to provide data on the evolution of the interstellar material, to understand its further evolution and provide constraints for modelers of astrophysical environments.
Interstellar dust grain particles are immersed in vacuum ultraviolet and cosmic ray (high energy particles) radiation environments influencing their physicochemical composition. Owing to the energetic ionizing interactions, carbonaceous dust particles release fragments that have direct impact on the gas phase chemistry.
The exposure of carbonaceous dust analogues to cosmic rays is simulated in the laboratory by irradiating films of hydrogenated amorphous carbon interstellar analogues with energetic ions. New species formed and released into the gas phase are explored.
In these experimental simulations, thin hydrogenated amorphous carbon films (called a-C:H), astrophysical analogues giving rise to a widespread astronomical spectroscopic signature observed at 3.4 μm in the diffuse medium of galaxies, were irradiated with gold (950 MeV), xenon (630 MeV), and carbon (43 MeV) ions at the GSI UNILAC accelerator (see Fig 1 for a view of the experimental setup). The evolution of the dust analogues was monitored in situ as a function of fluence at 40, 100, and 300 K. 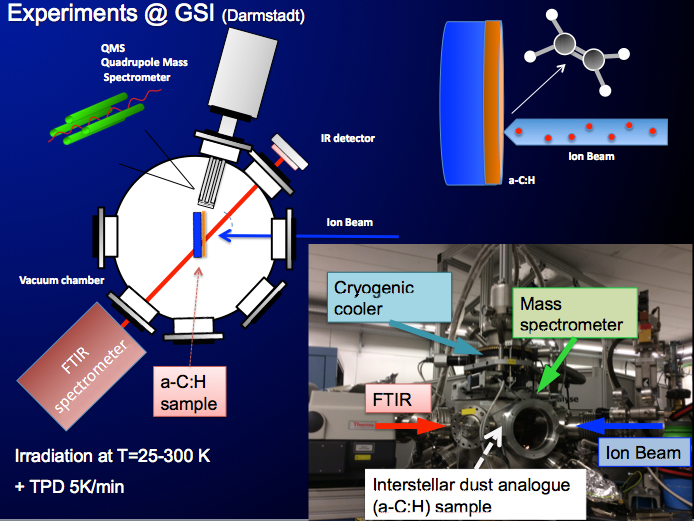 Fig 1: View of the experimental setup configuration used to study irradiation of interstellar dust analogues at GSI.  The M branch equipped with an FTIR spectrometer, QMS and cryogenic high vacuum sample chamber is coupled to the GSI UNILAC delivering swift heavy ion beams.
Effects on the solid phase are studied by means of infrared spectroscopy complemented by simultaneously recording mass spectrometry of species released into the gas phase. Specific species produced and released under the ion beam are analyzed. The main radiolysis product is H2, participating in the dehydrogenation of the a-C:H in an astrophysical context. These irradiations also show that the production of numerous small hydrocarbons (CxHy ; x = {1, 4}) is efficient with swift heavy ions (see Fig. 2), and increases over the H2 production with the deposited energy.
The cross sections derived from the experiments for the interaction with swift heavy ions were implemented in an astrophysical model showing that the effect of cosmic ray irradiations are important in intermediate to dense regions where the high-energy cosmic ray component penetrates much deeper with respect to the external ultraviolet field and reaches at depth an equilibrium with the secondary ultraviolet field produced by cosmic ray interaction with H2 (See Fig.3).
The production of these carbonaceous species will contribute to eroding the a-C:H dust grains. The extent of this process will depend on the hydrogen content of the interstellar dust grains. If the hydrogen content is high, either intrinsically or via hydrogenation by interaction with the ambient hydrogen gas, the production of small volatile carbonaceous species is efficient, and leads to the complete destruction of the grains while the species released enrich the gas phase chemistry. We expect that this efficiency will decrease if the hydrogen content gets much lower and that the grains will eventually convert into a polyaromatic structure. The species released during experiments simulating the cosmic ray ions, starting with less hydrogenated, more polyaromatic interstellar analogues, will be further investigated using dedicated forthcoming experiments. 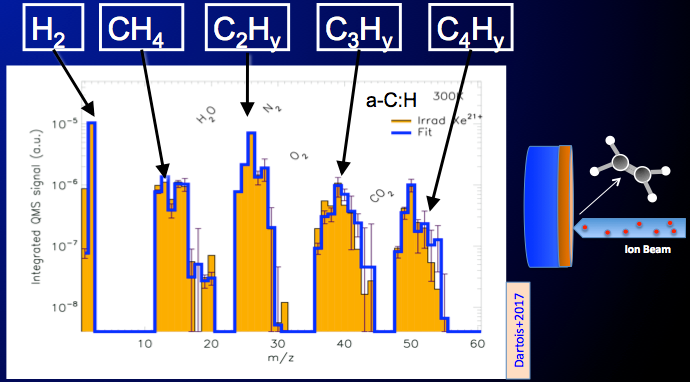 Fig 2: Mass spectrometer time integrated signal for a-C:H sample irradiated with 132Xe21+ (orange bars) at 300 K. The best model species fits contributing to the signal are shown in blue. The labels above mark the positions where residual contaminant gases could contribute. 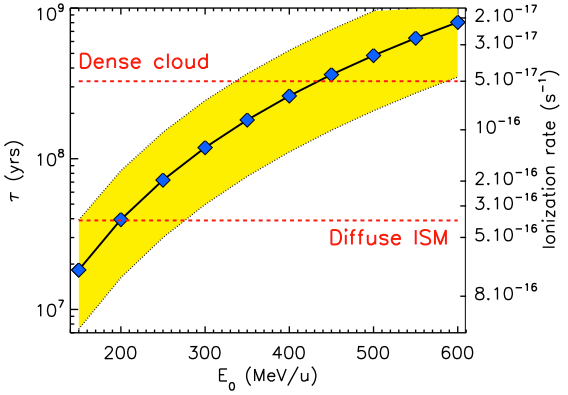