21/01/2014 - 00:00
After a 31 months hibernation phase, the ROSETTA spacecraft has woken up as scheduled on January 20th. After this critical milestone, the spacecraft will progressively get closer to the comet, then it will get into orbit (end of June) so as to map it and to select a landing site for the Philae lander, which will reach the surface of the nucleus in November. IAS has contributed to 3 experiments on board the orbiter and the lander.

In its journey to comet Churyumov-Gerasimenko, the Rosetta spacecraft has just come out of the hibernation state initiated in June 2011 as the heliocentric distance was too high (> 4.5 AU) for active operations. The wake-up was scheduled on Monday, January 20th. After an automatic sequence lasting several hours for reconfiguring the spacecraft and pre-heating the telemetry system, the wake-up signal was received in ESOC (Darmstadt) at 19h15. After this critical milestone, all subsystems then payload instruments will be reactivated over the next few months. Three maneuvers will be implemented starting in April so as to match the velocity of the comet in June. The nucleus and the environment will then be characterized so as to select a landing site for the Philae lander, which will be deployed in November 2014. The comet will then be studied all the way to perihelion (August 2015) and beyond till December 2015.

IAS has a major participation in the ROSETTA mission, with scientific, instrumental and operational contributions. On the orbiter, IAS has contributed to the development of two instruments: COSIMA, a time of flight mass spectrometer dedicated to the analysis of cometary grains, and VIRTIS, an imaging spectrometer in the visible and near-IR, which will characterize minerals, ices and molecules on the surface and in the coma. On the Philae lander, IAS assumes the scientific and technical responsibility of the CIVA instrument suite (panoramic and stereo cameras, two microscopes in the visible and the IR). Furthermore, IAS (J-P. Bibring) shares the overall scientific responsibility of the Philae Lander with the Max-Planck institut for solar system science (Lindau-Göttingen).

Schedule of the comet rendezvous 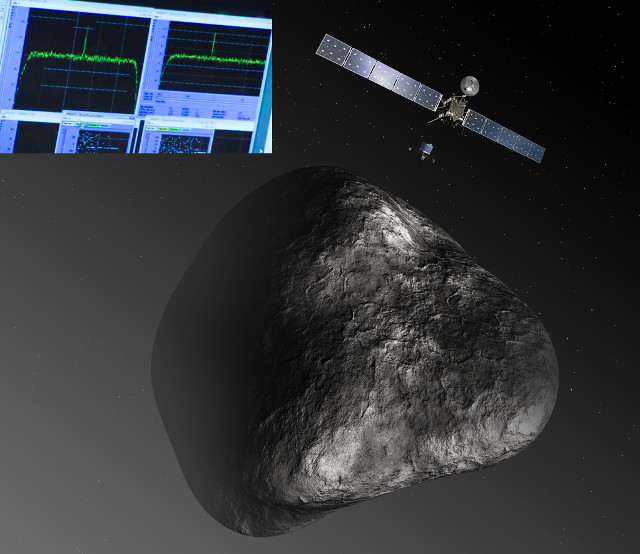 Artist's view of the Rosetta orbiter just after separation of the Philae lander, with the rise of the signal from the spacecraft on January 20th at 19h18 as an insert