PSUP, a portal towards Mars

The enormous quantity and complexity of planetary data acquired by spacecraft during the last two decades has created a demand within the planetary community for access to the raw and high level data archives and to the tools necessary to analyze these data. The number and the size of the datasets are so large that an information system to process, manage and distribute data is critical. In this framework, the Observatories of Paris Sud (OSUPS) and Lyon (OSUL) have recently developed a portal, called PSUP (Planetary SUrface Portal), to provide users with efficient and easy access to these data products.


Among the various Solar System targets, Mars is unique because the combined datasets from the Viking, Mars Global Surveyor, Mars Odyssey, Mars Express and Mars Reconnaissance missions provide a tremendous wealth of information that can be used to study the surface of Mars. This is why this first version of PSUP is dedicated to the Martian surface.

The development of PSUP was performed following a number of strategies: 1) to allow the processing and downloading of data via an application called MarsSI (Martian surface data processing Information System); 2) to provide the visualization and merging of high level (image, spectral, and topographic) products and catalogs via a web-based user interface (MarsVisu), and 3) to distribute some of these specific high level data with an emphasis on products issued by the OSUPS and OSUL science teams.

MarsVisu gives access to many Mars data products: image footprints and rasters from the MarsSI tool; albedo mineral, emissivity and thermal inertia global maps from spectrometers, mosaics from imagers and high level specific products (defined as catalogs or vectors). MarsVisu allows the overlapping of these data products that can otherwise be difficult to use collectively.

Further developments, including the addition of high level Mars data products (regional geological maps, new global compositional maps…) are foreseen. Ultimately, PSUP will be adapted to the data from other planetary surface and space missions in which the French research institutes are involved.


PSUP is managed by the IAS in partnership with GEOPS and OSUL (Observatoire de Lyon) and with technical support from CNES. ESA has chosen to highlight this PSUP service. 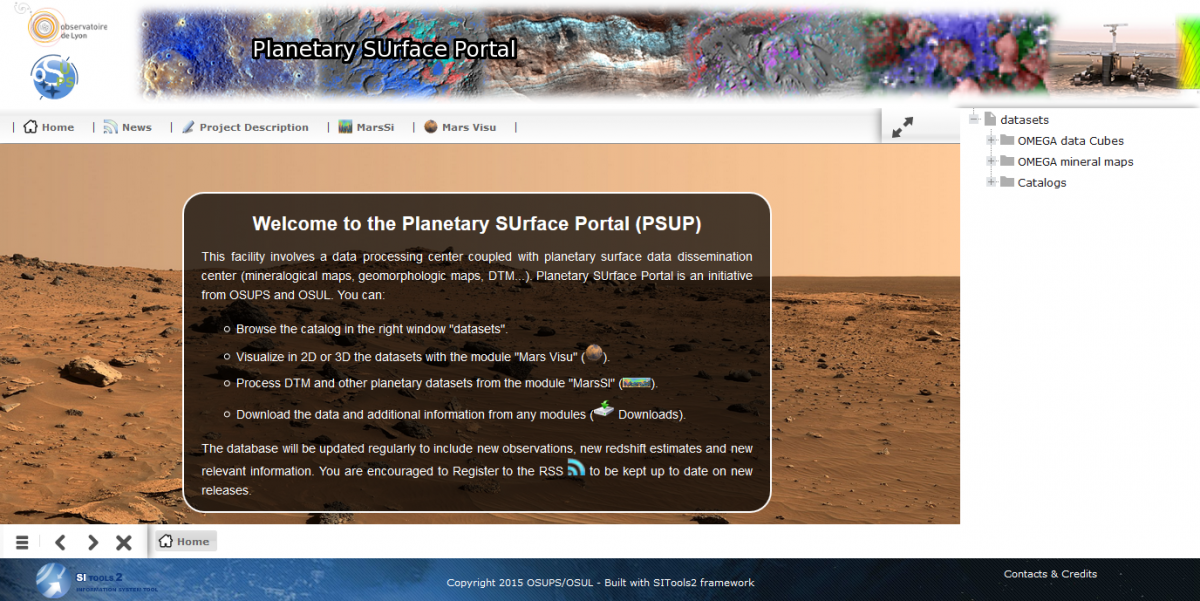