A galaxy protocluster dating from when the Universe was the most active in star formation has been discovered. It forms many stars at a pace not reproduced by current models, and it will eventually evolve into a superstructure.

Proto-clusters of galaxies are sets of very young galaxies that are in the process of coming together under the effect of gravitation and that will give rise to the largest gravitational structures known: clusters of galaxies in the nearby universe. The understanding of the formation mechanisms at work within these structures could prove to be valuable for understanding the history and structuring of the Universe. The results of the work of the international team (France, Italy, USA, Japan), presented in two scientific papers, provide essential information on the properties of this proto-cluster named PHz G237.01+42.50 (or G237 for short) and of the galaxies which compose it.

G237 is the first spectroscopically confirmed proto-cluster from a sample of more than 2000 candidates identified by Planck, the ESA satellite launched in 2009 to probe the cosmic microwave background and developed largely at the IAS. This sample complements at higher redshift the sample of closer galaxy clusters detected by the SZ effect by Planck. G237 is seen when the Universe was 3 billion years old (redshift z=2.16), at the time of the peak of star formation density in the Universe.

The fate of this proto-cluster of galaxies is to evolve into a complex system similar to the Virgo supercluster, a massive structure in the local Universe of which our Milky Way galaxy is a part. Planck's observations suggest a proto-cluster with a prodigious star formation rate, ten thousand times higher than that of our galaxy.

Additional observations with several ground- and space-based telescopes, including ESA's Herschel, have confirmed its association with two strong concentrations of galaxies. Each of them is expected to collapse in about 10 billion years into a cluster of galaxies whose dark matter halo will have a mass of 5 to 6×1014 solar masses, equivalent to the largest galaxy clusters today.

“The 38 galaxies identified with the MOIRCS instrument on the Subaru Telescope”, says Dr. Y. Koyama (Subaru Telescope), the principal author of one of the two studies, “are the least dusty star forming galaxies in the protocluster, but there might be many more members that were missed by our selection because hidden by thick layers of dust, or because they are not active star formers.”

“We now understand the extremely large star formation rates derived from the Planck measurements as we find, thanks to more detailed images at sub-millimetre wavelengths provided by some of the deepest observations carried out by the Herschel telescope, evidence of bright sub-millimetre galaxies along the line of sight that are not part of the protocluster. Remarkably, the total star formation rate in the protocluster remains impressively high, at least 2200 solar masses per year, and likely twice as much, based on the estimated number of galaxies hidden by dust that were missed by the optical observations.” affirms Dr Mari Polletta (INAF & IRAP), leader of the second study.

“Planck detected these protocluster candidates from space about a decade ago with Planck & Herschel. Their confirmation and study have required time, numerous observations with other telescopes, and hard work from researchers and students” explains Prof Hervé Dole (Université Paris-Saclay). “It’s a great achievement to actually see one of these protoclusters studied in detail, but many questions remain open as they challenge the models of their formation and our understanding of star-formation in the most massive dark matter haloes of the early Universe.”

“These exceptional structures offer the opportunity to investigate several key questions in astronomy” says Prof. Brenda Frye (University of Arizona). “With new data from the James Webb Space Telescope, to be launched in December 2021, we will image with unprecedented fine details some of these active protoclusters to delineate the morphology of individual galaxy members and understand the processes responsible for their physical properties.”

“We are in the process of analyzing more observations on this and other Planck protoclusters with the goal of tracing the gas that gives birth to new stars and feeds the supermassive black holes, determine its origin and explain the observed extraordinary activity.” concludes Dr Mari Polletta.

“The European cosmology space mission Euclid, to be launched in about a year, will also exquisitely help us in studying these structures and finding more” adds Prof. Dole, “with the goal of deriving more general laws than just a few exciting cases.”

Other observing campaigns are underway on other Planck proto-clusters candidates, notably with the IRAM millimeter telescopes. These first results are part of a larger project to better understand the assembly of massive structures such as proto-clusters of galaxies, the mechanisms behind their star formation rates, and the interaction between the dense environment and the rapid evolution of the galaxies that inhabit these dark matter halos. 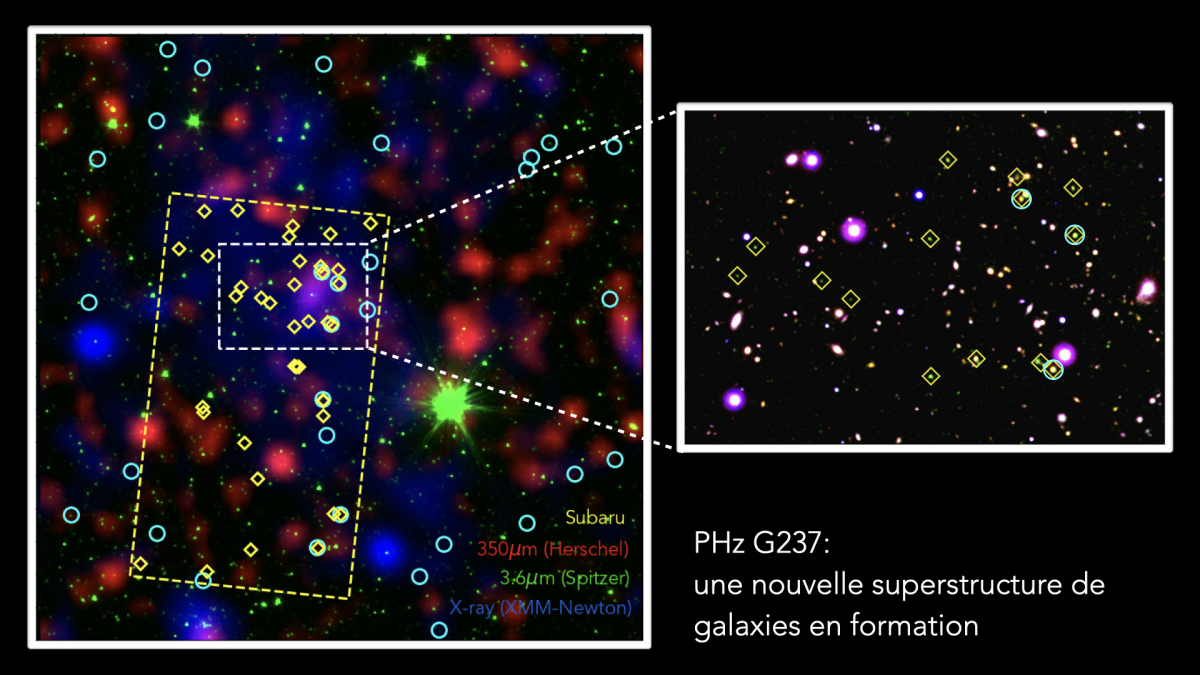