Has the hidden matter of the Universe been discovered?

Astrophysicists consider that around 40% of the ordinary matter that makes up stars, planets and galaxies remains undetected, concealed in the form of a hot gas in the complex cosmic web. Today, IAS scientists may have detected, for the first time, this hidden matter through an innovative statistical analysis of 20-year-old data.

Galaxies are distributed throughout the Universe in the form of a complex network of nodes connected by filaments, which are in turn separated by voids. This is known as the cosmic web. The filaments are thought to contain almost all of the ordinary (so-called baryonic) matter of the Universe in the form of a diffuse, hot gas.  However, the signal emitted by this diffuse gas is so weak that in reality 40 to 50% of the baryons¹ go undetected.

These are the “missing” baryons, hidden in the filamentary structure of the cosmic web, that Nabila Aghanim, a researcher at IAS, and Hideki Tanimura, a post-doctoral researcher, together with their colleagues, are attempting to detect. In a new study, funded by the ByoPiC ERC project, they present a statistical analysis that reveals, for the first time, the X-ray emission from the hot baryons in filaments. This detection is based on the stacked X-ray signal, in the ROSAT² survey data, from approximately 15 000 large-scale cosmic filaments identified in the SDSS³ galaxy survey.  The team made use of the spatial correlation between the position of the filaments and the associated X-ray emission to provide evidence of the presence of hot gas in the cosmic web, and for the first time measure its temperature.

These findings confirm earlier analyses by the same research team, based on indirect detection of hot gas in the cosmic web through its effect on the cosmic microwave background⁴. This paves the way for more detailed studies, using better quality data, to test the evolution of gas in the filamentary structure of the cosmic web. 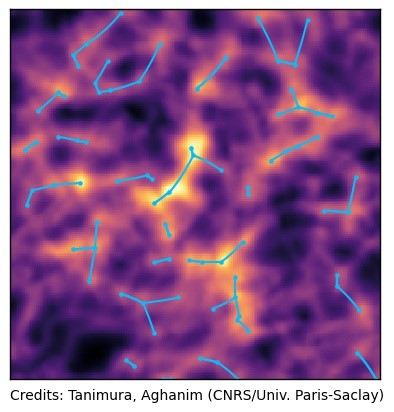 Figure : Simulated image of the X-ray emission from gas in the cosmic web filaments.

Notes :
¹ Baryons are particles consisting of three quarks, such as protons and neutrons.  They make up atoms and molecules as well as all the structures that can be seen in the observable Universe (stars, galaxies, galaxy clusters, etc). The ‘missing’ baryons, undetected until now, should not be confused with dark matter, which is made up of non-baryonic matter of unknown nature.
² ROSAT was a German space telescope designed for the observation of X-rays.
³ The Sloan Digital Sky Survey (SDSS) is a programme for surveying celestial objects using a dedicated 2.5-metre optical telescope located at Apache Point Observatory (New Mexico, USA). It began collecting data in 2000.
⁴ See the article: Density and temperature of cosmic-web filaments on scales of tens of megaparsecs, Tanimura, H.; Aghanim, N.; Bonjean, V.; Malavasi, N.; Douspis, M. Astronomy & Astrophysics, Volume 637, A41 (2020).