BepiColombo has flown by the Earth en route to Mercury

One and a half year after its launch in October 2018, the BepiColombo spacecraft has performed an Earth flyby on April 10, 2020, so as to reach Venus on its way to an orbital insertion around Mercury end of 2025. BepiColombo is the first European mission using ionic propulsion, which makes it possible to implement major changes in the trajectory with a limited impact on the mass budget.

This ambitious mission will study the planet closest to the Sun with two polar orbiters. An orbiter under European responsibility will have an altitude between 400 and 1500 km so as to study the surface and interior of the planet. The other orbiter, under Japanese responsibility, will be inserted in an elliptical orbit reaching an altitude of more than 10000 km, so as to study the environment of Mercury, which strongly interacts with the surface of the planet as there is no atmosphere. IAS has provided the electronic module and flight software of the Simbio-Sys instrumental suite, under Italian scientific responsibility, which will generate more than 50% of the data from the European orbiter.

Other images from ESA : https://www.esa.int/Science_Exploration/Space_Science/BepiColombo/BepiColombo_Earth_flyby_in_images 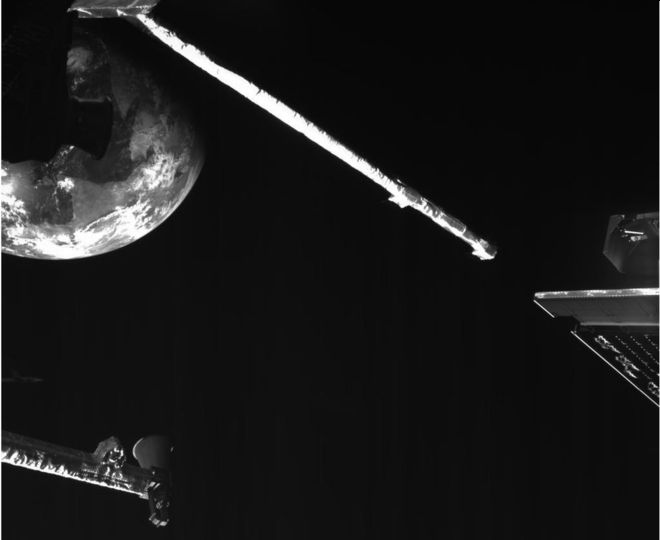 Image of the Earth taken by a camera on BepiColombo. Credits ESA/Bepicolombo.