The PLATO (Planetary Transits and Oscillations of stars) space-based observatory has been selected on the 19th of February by ESA’s Science Programme Committee for implementation as part of its Cosmic Vision 2015–25 Programme. This mission, planned for launch by 2024, will be able to search for planets orbiting alien stars and to characterize these stars.

The mission will address two key themes of Cosmic Vision: what are the conditions for planet formation and the emergence of life, and how does the Solar System work?

By using 34 separate small telescopes and cameras, PLATO will search for planets around up to a million relatively nearby stars spread over half of the sky. It will monitor these stars, searching for tiny, regular dips in brightness as their planets transit in front of them, temporarily blocking out a small fraction of the starlight.

It will also investigate seismic activity in the stars, enabling a precise characterisation of the host sun of each planet discovered, including its mass, radius and age. When coupled with ground-based radial velocity observations, PLATO’s measurements will allow a planet’s mass and radius to be calculated, and therefore its density, providing an indication of its composition.

The mission will identify and study thousands of exoplanetary systems, with an emphasis on discovering and characterising Earth-sized planets and super-Earths in the habitable zone of their parent star – the distance from the star where liquid surface water could exist.

PLATO, with its unique ability to hunt for Sun–Earth analogue systems, will build on the expertise accumulated with a number of European missions, including CoRoT and Cheops. The discoveries of PLATO will help to place our own Solar System’s architecture in the context of other planetary systems.

PLATO will be launched on a Soyuz rocket from Europe’s Spaceport in Kourou by 2024 for an initial six-year mission. It will operate from L2, a virtual point in space 1.5 million km beyond Earth as seen from the Sun.

IAS will provide official data products of the mission, such as stellar modes parameters, the age, radius, and mass of stars, as well as their rotation rate, and it will contribute to the search for transiting exoplanets and to their characterisation. The laboratory will also perform tests of the cameras, to ensure that they will be able to operate accurately in the extreme conditions of space. The IDOC center and the Calibration Station of IAS will be involved in these developments.

The IAS contribution to PLATO is the direct heritage of the experience gained by the Solar and Stellar Physics team and by the Solar System and Planetary Systems team with the analysis of the lightcurves measured by the CoRoT and Kepler missions. 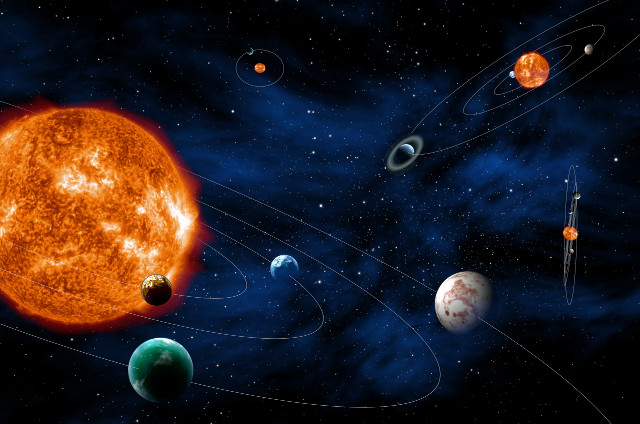 Artist's view of an exoplanetary system.