The SPICA infrared space telescope has just been pre-selected by the European Space Agency (ESA) to participate in the final competition, which in September 2021 will see the choice of ESA's next medium-sized mission (mission M5).

SPICA is a large infrared telescope (diameter 2.5 m) cooled to a temperature only a few degrees above absolute zero. This concept was proposed to ESA in the framework of the competition for the M5 mission of the "Cosmic Vision" programme (25 proposals submitted) by a consortium of European research laboratories led by Holland in close collaboration with the Japanese Space Agency (JAXA), and in which CEA, CNRS and their associated universities in France participate with the support of CNES.

The selection of SPICA is a crucial step in answering the great questions posed by 21st century astronomy, concerning: the growth and evolution of galaxies over cosmic time that will be completely characterized in the distant universe, and in our Galaxy the processes that determine the formation of stars and planetary systems will be elucidated.

SPICA  has been designed to be extremely sensitive to infrared light. This, unlike visible light, is not strongly attenuated by the cosmic dust that fills the Universe. The observation of infrared radiation therefore literally reveals entire parts of the Universe that are hidden from us, allowing us to see deep into galaxies, star formation clouds, and systems where planets are formed.

One of the major questions in modern astronomy is to understand the processes that regulate the formation and evolution of galaxies. Early in the history of the universe, about 12 billion years ago, the first stars and galaxies began to form. Over the next few billion years, this process of galaxy formation accelerated and became increasingly efficient until it peaked about 9 billion years ago. Since that time galaxy formation has declined steadily. The reason for the increase in power, the peak of the galaxy formation process and its subsequent decrease, are still largely subject to debate. SPICA will record the spectra of several thousand galaxies distributed over this key epoch. These unique data will allow us to precisely probe the physical conditions within and around these galaxies, and thus determine what factors govern their formation and evolution.

In the nearby Universe, SPICA will provide us with a unique view of the processes that govern the formation of stars and planetary systems by combining the power of spectrometry with that of polarimetry in the densest regions of where the dust and gas can only be explored in the infrared. The polarimetry of the dust emission in nearby interstellar clouds will be used to characterize, for the first time, the morphology and strength of the magnetic field at the critical scales of the onset of the collapse of clouds to form stars and planets within molecular filaments. The infrared spectroscopy of ions, atoms, molecules, dust particles and ice particles is a unique tool. Not only does it allow us to characterize the physical conditions within and around the protoplanetary disks, but it also accurately traces the critical point that separates water vapour from ice within them. By combining these studies with those of the dust discs and belts present around older planetary systems, the link can be made with our own solar system and its cloud of debris and peripheral dust, the Oort cloud; in this way SPICA will provide unique information on the formation of our own solar system.

SPICA has been made possible through a combination of several cutting-edge technological innovations. A key element is the large, 2.5 metre diameter, telescope cooled to a temperature only a few degrees above absolute zero, which drastically reduces the level of radiation emitted by the telescope itself. In this way, the ultra-sensitive detectors at infrared wavelengths can be used to the maximum of their potential. The combination of a cryogenic telescope with novel detectors will make SPICA the most efficient observatory ever built for observations in the far infrared range - a 100-fold gain in sensitivity compared to the Herschel Space Observatory, which was in service from 2009 to 2013. Thanks to this high sensitivity SPICA should revolutionize our understanding of the formation of stars, planets and galaxies.

The SPICA observatory will be developed under the project management of the European Space Agency (ESA) within the framework of a partnership with the Japanese Space Agency (JAXA). It will be equipped with three focal instruments covering the entire infrared wavelength range from 12 to 350 microns. A mid-infrared range spectrometer (12 - 35 microns) will be built by a Japanese consortium led by Nagoya University under the auspices of the Institute of Space and Astronautical Science (ISAS); a far infrared range spectrometer (35 - 210 microns) will be built by a European consortium under the auspices of SRON in Holland; and a compact polarimetric imager will be provided by an international consortium under the responsibility of CEA in France.

Like all world-class observatories, on the ground or in space, SPICA will be used by astronomers around the world. Observer programmes will be selected on the basis of their scientific merit by independent experts. Proposers will have a one-year exclusivity over their data, beyond this period the data will be made public.

France is one of the founding countries of the SPICA project. In partnership with CNES, its laboratories (CEA, CNRS and Universities) will contribute to the observatory's instrumentation thanks to the development and characterization of key technologies: cryo-refrigerator and sub-kelvin detector arrays, electronic systems for controlling superconducting detector arrays. These projects will be developed under the responsibility of DAp-AIM (involving Irfu and LETI/DOPT) and INAC/SBT of CEA, LAB (Bordeaux), IRAP (Toulouse) and IAS (Paris-Saclay). France has a large scientific community interested in SPICA, with unique expertise in this field thanks to the Herschel and Planck space missions and the PILOT stratospheric balloon project. The French space industry, in conjunction with the Airbus and Thales industry groups, has unique know-how in the construction of large telescopes for space astronomy. France is therefore particularly well placed to gain the project management of the satellite and its telescope during ESA's calls for tenders. 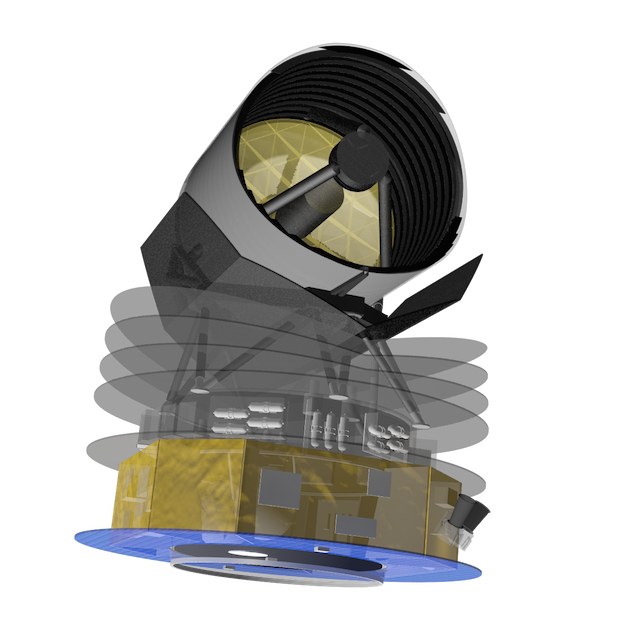